After a day spent on Phuket’s Karon beach recovering from a substantial hangover due to four days of partying during the Thai New Year celebrations in Bangkok I headed early in the morning for the short boat journey to the Phi Phi (pronounced ‘pee pee’) islands. With just a few days left to spend in Thailand before moving onto Indonesia I definitely had to give a try at one of those mythical Thai tropical island of the Andaman coast so I decided to play it safe and choose the most talked about for it’s unparalleled natural beauty as a destination.

The two main islands of this protected marine reserve are uninhabited Koh Phi Phi Lei, the one that put firmly it on the mass tourism trail overnight when the movie “the Beach” with Leonardo Di Caprio was filmed on location and Koh Phi Phi Don, where the ferry will drop you off and the only one where accommodations and (over)development is authorized.

While the ferry slowly approached Koh Phi Phi Don the first impressions were all but disappointing as the first glimpses revealed long stretches of white sand beaches where vivid turquoise waters gave way to massive Limestone cliffs surrounded by miles of trackless forest on each side of the island. Immediately comparisons with El Nido in the Philippines came to mind as both share similarities. While Koh Phi Phi Don is set on a much more grandiose scale it lacks the variety and virgin state of the surrounding islands in the Bacuit Bay. 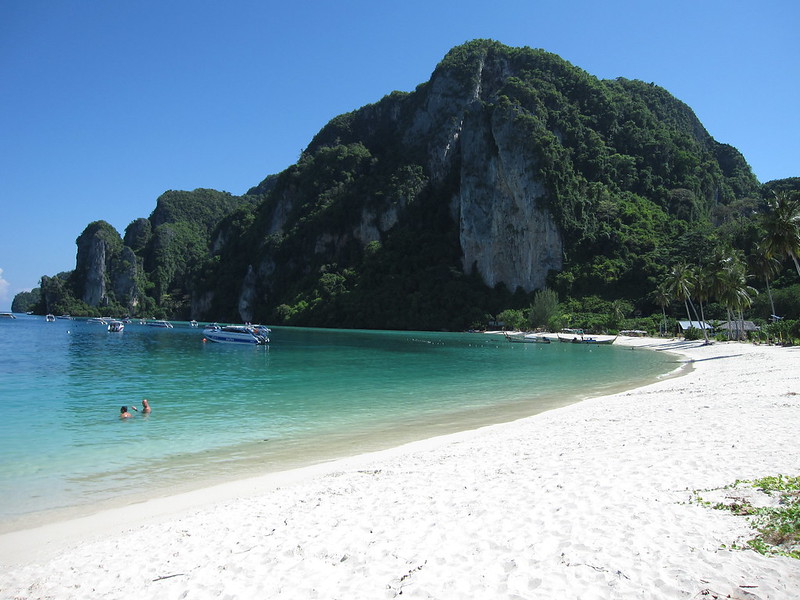 If it wasn’t for that thin and long strip of sand that make up the central and busiest portion of the island Phi Phi Don would actually be made up of two islands with the bays Ao Loh Dalum located north and Ao Loh Dalum south. The water itself at Ao Loh Dalum beach is almost impracticable due to the incessant flow of ferries and long tail boats coming and going leaving but Ao Loh Dalum really accessible for a swimming. 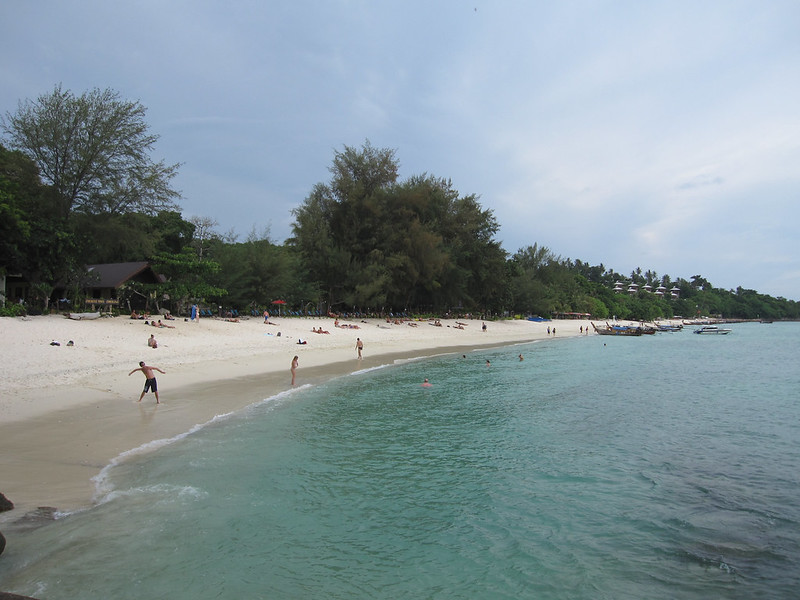 But since 80 to 90% of the Phi Phi Don’s accommodations are around this central portion of the island in the Tonsai Village the place can get a bit claustrophobic and packed so you might want to escape a bit further down southwest to Had Yao or “Long Beach” which is considered the best with the softest and finest white sand.  Further North on the East coast as location gets more remote things calm down and become much more peaceful. 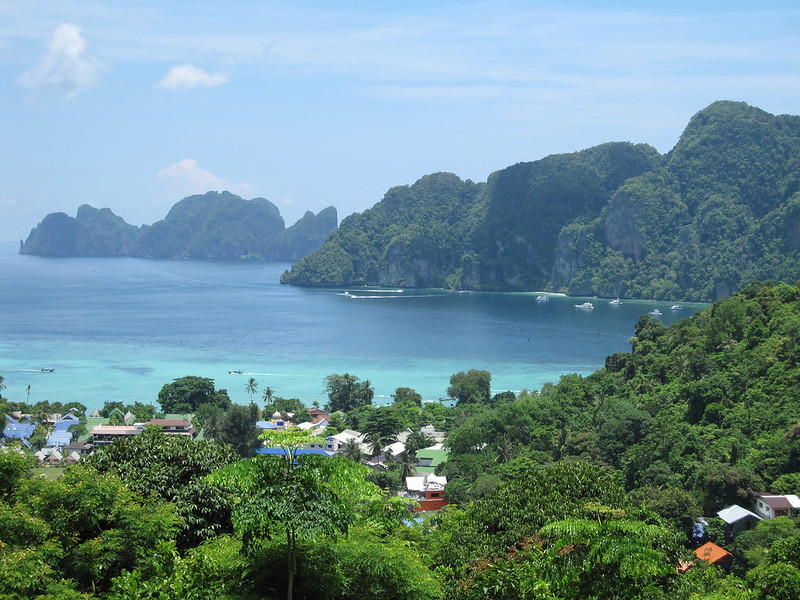 I definitely had a love-hate relationship with Koh Phi Phi and ultimately whether you like it or not will depends on your idea of what good times on an island in paradise is.  Being one of the prominent destinations on the Southeast Asia backpacker trail, expect to be surrounded by hundreds of other Caucasian foreigners (mostly in their early 20’s) enjoying the bars and all night parties as much as beaches and water-sports. While there still is a chance for you to get a moment alone on Phi Phi,  it’s not easy… This by all means is by Southeast Asian standards, as it’s still but a tiny fraction of what you’d get in the most sought after beach destinations in Europe. 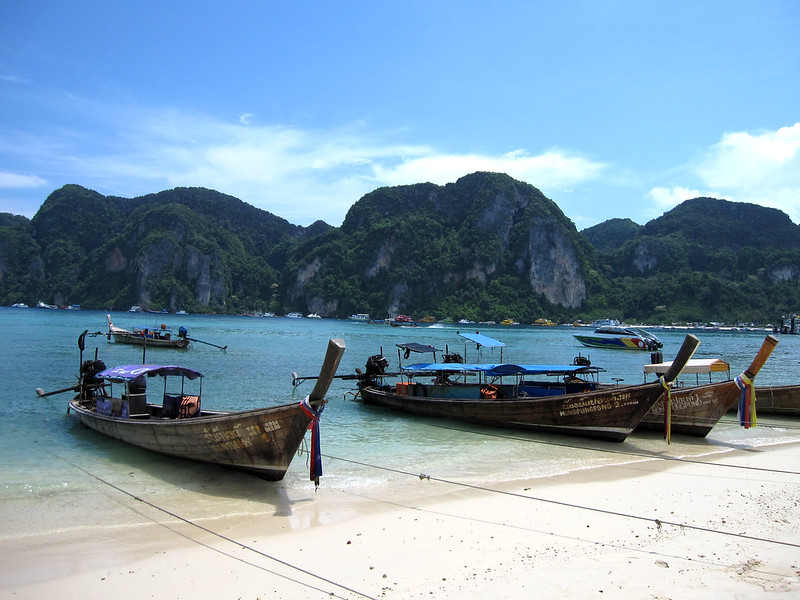 Though on average expensive compared to the rest of Thailand it’s still much much cheaper than similar premier island destinations around the globe. Good luck finding a decent room on the French Riviera in or Hawaii for fifteen dollars a night.

How to get to Phi Phi islands by boat 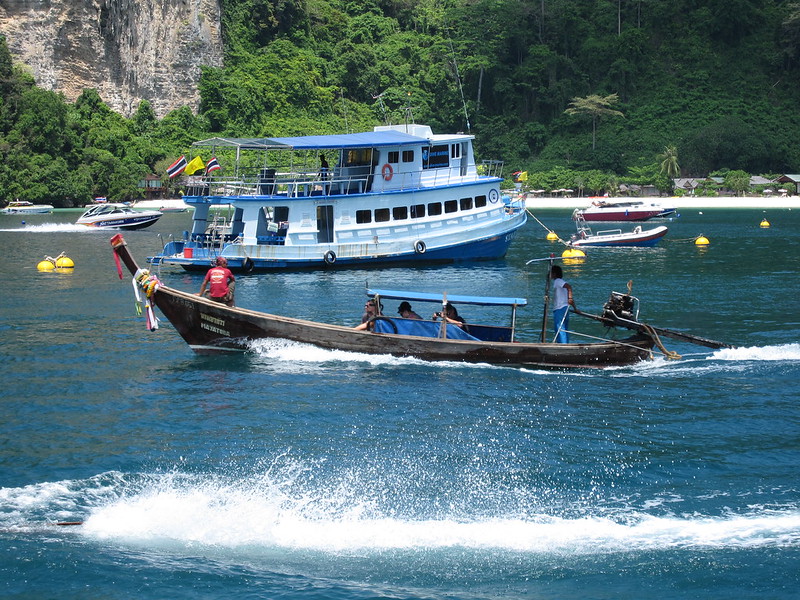 Palolem and the beaches of South Goa

Love it, as always Cool and quality! Keep up the good work! We enjoyed all of it.

gorgeous & glorious beaches! thanks for sharing this one, vincent.

Thanks for sharing those lovely photos

I want to always visit on this place. Very nice information.

Totally different atmosphere and vibes than other parts of Thailand. Its a small island so no vehicles are there. Streets in the market are really narrow. During night the beach becomes a party. It is a great place for kayaking because of clear still water and corals.